Can You Use a Steam Iron without water?

Can You Use a Steam Iron without water?

Thanks for taking your time to read our information on dry irons vs steam irons. In this article we will explaining the difference between a dry iron and a steam iron.

Most people in the United Kingdom will be familiar with the normal steam iron. There are however dry irons which some buyers prefer to use. Some people refer to dry ironing as "the way it used to be."

Dry irons were popular long before steam came into being. In simple terms these have a soleplate where the temperature can be controlled and that is pretty much all there is to them.

The key benefits of a dry iron is you don't have to fill them with water. As such there is zero risk of any water splashes, and you never have to worry about getting rusty brown spots on a nice white shirt.

We discovered that when doing our research, that most dry iron users, are those people who are simply fed up with leaking steam irons that simply never last that long.

Almost always we found that they had suffered one too many mishaps, from a leaking steam iron, that covered a garment in rust spots, water damage or simply ruined.

In the table below we have shown the key differences between these two types of irons. 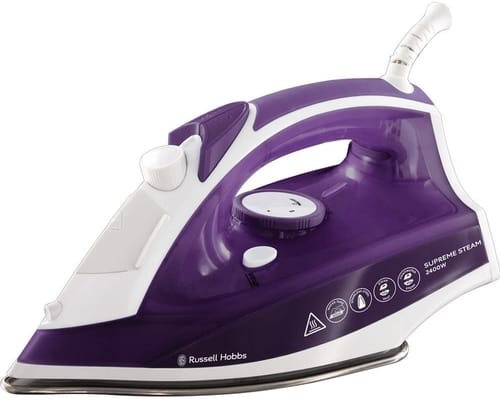 People who buy dry irons are those who have been caught out getting water and rust spots on their clothes. You can live with this if it happens once or twice. However if it is a continuing problem, many people make the switch from the steam version to a dry model.

These are usually cheaper than steam irons, and they will last longer. They are also simpler to use. Some see these as being old fashioned, but many buyers just prefer this simpler method.

As and when steam is required for tougher wrinkles and creases, these buyers will use a spray bottle for those smaller jobs.

They are actually quite difficult to find on the United Kingdom market as they are only used by a small minority of the population. Some dress makers and fashion houses still prefer to use these.

The reason for that is that they can be used on almost every type of fabric without risk.

Tefal and Philips sell these, and you will find the odd model from Rowenta. One thing to be aware of is that many of these are actually sold with an EU plug, as that is where they are manufactured.

You will need an adapter to be able to match their 2 pin system to our 3 pin system.

Steam irons can also be used as a dry iron. You don't have to fill these with water. The only disadvantage with that is some people don't like the holes on the bottom of the soleplate that all steam irons will have.

Those can catch clothes and snag them if there are any edges. The benefit is that you can easily switch to steam if you want to.

A disadvantage is, that if the steam iron develops any water related issues, then even when used as a dry iron, you could still suffer from issues such as rust on the soleplate.

Every day in the United Kingdom hundeds of steam irons are sold. Only a handful of dry irons are sold as these are just no longer that popular. There are many reasons for that.

Thomas Sears invented the very first steam iron and these became available as far back as 1938. Since then there have been many improvements in those, and dry ironing became less and less popular.

Steam is a fast and convenient method of quickly removing wrinkles and creases from clothes. Dry ironing requires that clothes are slightly damp, or the use of a water spray for tougher wrinkles.

Some people don't mind doing that as it is better than risking the problems that some steam irons have.

It is of course down to individual choice, but the vast majority of UK home owners will have a steam iron before a dry iron.

Why is my steam iron leaking water?

This website uses cookies to improve your experience while you navigate through the website. Out of these, the cookies that are categorized as necessary are stored on your browser as they are essential for the working of basic functionalities of the website. We also use third-party cookies that help us analyze and understand how you use this website. These cookies will be stored in your browser only with your consent. You also have the option to opt-out of these cookies. But opting out of some of these cookies may affect your browsing experience.
Necessary Always Enabled
Necessary cookies are absolutely essential for the website to function properly. This category only includes cookies that ensures basic functionalities and security features of the website. These cookies do not store any personal information.
Non-necessary
Any cookies that may not be particularly necessary for the website to function and is used specifically to collect user personal data via analytics, ads, other embedded contents are termed as non-necessary cookies. It is mandatory to procure user consent prior to running these cookies on your website.
SAVE & ACCEPT